Located in Huairou district in suburban of Beijing, the white garden building with changing slope roof is an artist’s studio and home, which was transformted by Office Project from an abandoned brick structure plant.

The design is like a stage set, or like “white space” of traditional ink painting technique, make the Chinese traditional culture elements in full display here.

Through the corner of room export, people enter from one room to another, through the open of every corner, form a visual corridors through buildings. Because this kind of nested layout, space of each layer are wrapped in another layer, reach one layer space needs get through another one, Space events in each layer are affected and watched by another layer, this is also thoroughly eliminated the element of the corridor.

This space may let us think of traditional ink painting scenario, such as painting from Zhou Wenju in Song dynasty, four men in a circle to play chess. There is a screen behind them, In the screen which shows a person in front of another screen on the couch served by a few servants. This perspective on screen makes people feel like they are in the same space with play chess in front，which makes it difficult to distinguish the screen definitely is a picture or just a real door frame in space. It is interesting to note that the originally is also mounted on a screen. Thus formed three layers of nested relations about the painting of the painting, box in box, impossible to distinguish which is the real space, which is the reappearance imagination space, a effect ” multiple screen”.

You can imagine to watch the lake and snow in next winter, listen to zither in a teahouse next summer under the warmsun; and in the big studio rocking chair with Cricket chirping, a series of touching scene. 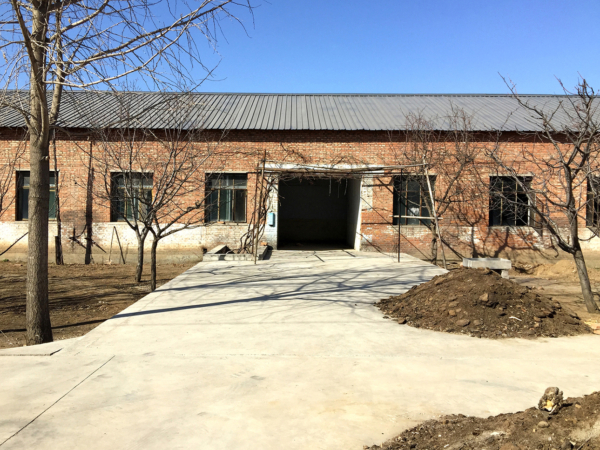 The site is also a typical linear brick factory with slope roof, which was used as factory office before. The height of the building is about six meters, with the triangular steel roof truss structure, overall keep in good condition.